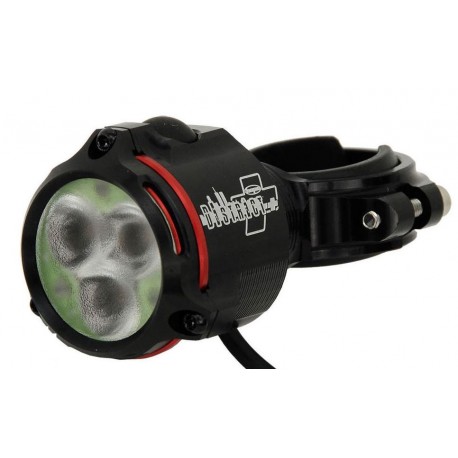 The District+ LED lamp has been re-developed for 2012/13 to reflect the advancements in red LED technology since its initial release in 2010.

The LEDs have been upgraded to Osram’s high efficiency Oslon LEDs, as used in the rear light modules at the high performance end of the automotive industry. The huge leap in efficiency has meant that we can maintain the high brightness of the original District lamp whilst increasing the run time with the 2600mAh battery to up to 200 hours. The lamp now features six power levels, three static and three flash settings. The District+ safety light is bright! Now that may sound like an obvious statement but until you’ve seen one of these on in the dark - amongst other lights,reflectors and distractions - you won’t quite believe it! We tested the lamp extensively over an 18 month period and found it to tick every box on the list. The most obvious thing came from those commuting. You are given a wider birth when overtaken, not pushed along in traffic…just more visible and therefore SAFER. Now, we aren’t suggesting that this meansyou won’t be unfortunate enough to have an accident, or at least a near miss - but it can’t do anything but help.